VANCOUVER, British Columbia, March 11, 2022 – Gander Gold Corporation (“Gander Gold” or  the “Company”), which commenced trading on the CSE Tuesday, March 8, 2022, is “All Newfoundland, All the Time” – a pure Newfoundland gold exploration play with a dominant land position of 2,257 sq. km on “The Rock”.

Anchored by Gander North and seven other projects throughout the Central Newfoundland Gold Belt, and a strong group of shareholders led by Eric Sprott and Sassy Resources (combined 63% ownership), Gander Gold is aggressively “Going For Gold” and expects to be a leading force in the developing Newfoundland Gold Rush.

Mr. Mark Scott, Gander Gold President and CEO, commented:“As gold rapidly approaches new all-time highs, there isn’t a better time to be hunting for new high-grade gold discoveries in such a favorable jurisdiction as Newfoundland. Gander Gold will provide shareholders with plenty of exciting action in the months ahead as we build on initial results from last year’s extensive programs. Given our large inventory of prospective ground, we have a lot of possibilities and options to build shareholder value.”

To view a video message from Gander Gold’s CEO, visit the current GanderGold.com landing page or click on this URL directly:

To view the Gander Gold trailer video, visit GanderGold.com or use this direct link:

Watch for the official launch of “GanderGold.com” in the near future.

Gander Gold Prepares To Follow Up On Robust Early Results

During its inaugural 2021 exploration season in Newfoundland, Gander Gold undertook an aggressive, large-scale early-stage exploration program, which included the collection of 21,133 soil and till samples across all eight project areas, completion of 1m resolution LiDAR surveys across all project areas, completion of 19,030 line kilometers of fixed wing Mag/VLF surveys, the collection of 330 “GT Probe” samples at Gander North, and a six-week prospecting campaign. Final results will be released over the coming weeks as crews prepare for a busy 2022 exploration season including diamond drilling.

The technical information in this news release has been reviewed and approved by Mr. Ian Fraser, P.Geo., Vice President of Exploration for Gander Gold Corporation. Mr. Fraser is the Qualified Person responsible for the scientific and technical information contained herein under National Instrument 43-101 standards. 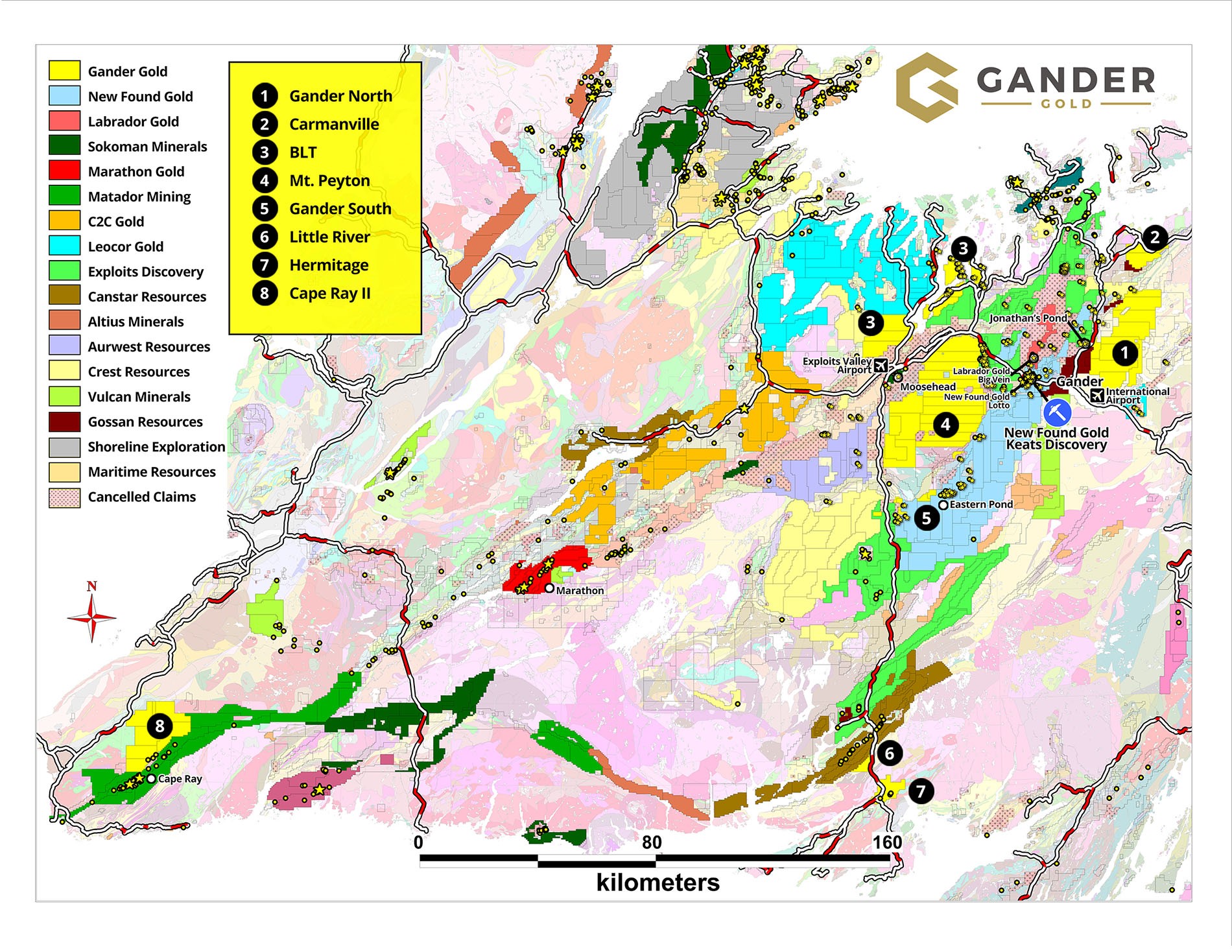 Visit GanderGold.com and sign up for news alerts to stay informed as exploration and corporate development continues year-round.

Gander Gold is an exploration stage resource company currently engaged in the identification, acquisition and exploration of high-grade precious metal and base metal projects in the Central Newfoundland Gold Belt. Its focus is on its eight projects in the Canadian province of Newfoundland & Labrador, namely the Gander North, Mt. Peyton, Cape Ray II, BLT, Carmanville, Gander South, Little River and Hermitage projects, which comprise 9,032 claims or approximately 2,257 km², making Gander Gold Corporation one of the largest claimholders in Newfoundland.

Investors are cautioned that, except for statements of historical fact, certain information contained in this document includes “forward looking information”, with respect to a performance expectation for Sassy Resources Corporation. Such forward looking statements are based on current expectations, estimates and projections formulated using assumptions believed to be reasonable and involving a number of risks and uncertainties which could cause actual results to differ materially from those anticipated. Such factors include, without limitation, fluctuations in foreign exchange markets, the price of commodities in both the cash market and futures market, changes in legislation, taxation, controls and regulation of national and local governments and political and economic developments in Canada and other countries where Sassy carries out or may carry out business in the future, the availability of future business opportunities and the ability to successfully integrate acquisitions or operational difficulties related to technical activities of mining and reclamation, the speculative nature of exploration and development of mineral deposits, including risks obtaining necessary licenses and permits, reducing the quantity or grade of reserves, adverse changes in credit ratings, and the challenge of title. The Company does not undertake an obligation to update publicly or revise forward looking statements or information, whether as a result of new information, future events or otherwise, unless so required by applicable securities laws. Some of the results reported are historical and may not have been verified by the Company.

The CSE has neither approved nor disapproved the contents of this news release. Neither the CSE nor its Regulation Services Provider (as that term is defined in the policies of the CSE) accepts responsibility for the adequacy or accuracy of this release.